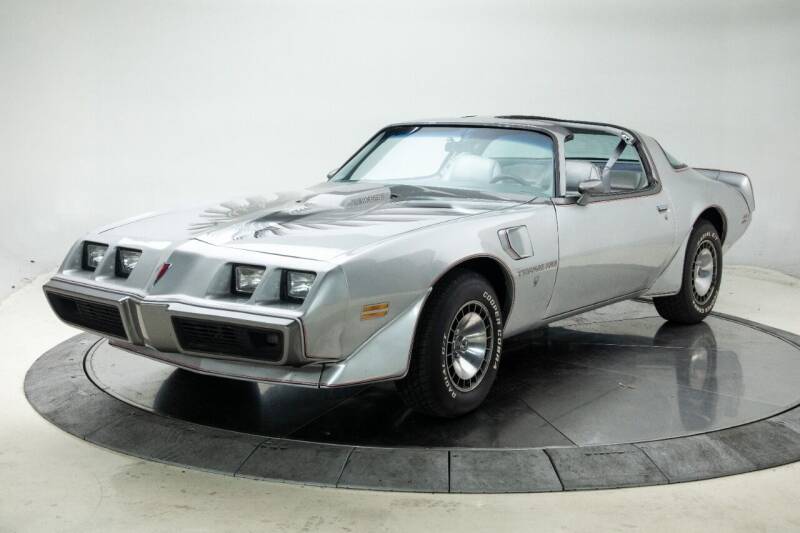 Ready to trade in?
Let us know what you have.
Have additional questions?
Give us a call and we'd be happy to help!

1979 Pontiac Trans Am "The 10th Anniversary Limited Edition." The big news in '79 was the anniversary Trans Am in a never-before-seen silver-and-charcoal scheme with a "super bird" on the hood—so called because its wing tips extended onto the tops of the front fenders. A new cast-aluminum turbo wheel design measuring 15 x 8 inches was employed. Inside, floor-to-ceiling silver-and-gray tones echoed the exterior. Special red lighting for the instruments, inspired by aircraft, was also part of the deal. Special when new and special today, the T/A 6.6-powered anniversary Trans Am makes a striking alternative to the Bandit's black-and-gold ride. with its special paint treatment, graphics, wheels, and more, this would be among the last of the Trans Ams offered with the "T/A 6.6" 400 or 403 Oldsmobile engines. As a collectible car from the 1970s, the anniversary Trans Am stands out in terms of desirability and value. Only 7,500 anniversary cars built. 5,683 were built with the 6.6 Litre Oldsmobile 403 and a Turbo Hydra-Matic 350 automatic. Current price guides currently value the car at $27,000 on the low side, $86,000 on the high end, with an average of $52,000. The anniversary Trans Ams were loaded with virtually every option and stickered north of $10,000 when new. That was big money in 1979, and adjusted for inflation, amounts to about $37,000 today. This car has the 403, turbo 350, 4 wheel power disc brakes, power steering, power windows, t tops, t top bags, and power locks with air conditioning. Aftermarket radio with amp and sub in trunk. Showing only 3031 miles on the odometer. We assume just turned over. Very nice driver shape with minor chips and little wear on the original leather interior. This is a great driver!

By placing this call you agree to the Terms and Conditions of Use of this website and that this call may be recorded by Duffy's Classic Cars, using technology powered by Carsforsale.com, for business purposes.

By placing this call you agree to the Terms and Conditions of Use of this website and that this call may be recorded by Duffy's Classic Cars, using technology powered by Carsforsale.com, for business purposes.