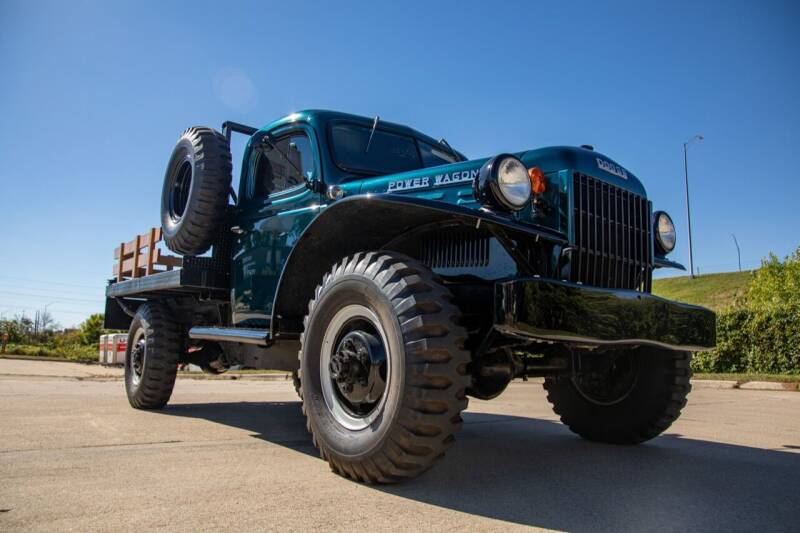 unedited To You - THE OWNER OF THE FINEST TRUCK BUILT - You have made a wise decision in the selection of this Dodge "Job-Rated" Power Wagon. Your choice exemplifies sound judgement of truck values and operating economy. Dependability is the key-note of your Dodge Power Wagon. With proper attention, your Power Wagon will give you satisfactory operation for many, many miles. - Power Wagon Owner's Manual T137 230 CI inline 6-cylinder engine 4-speed manual transmission Hi-Lo range 4-wheel drive transfer case with PTO Dual Braden MU2 winches with winch control handles Side mount spare Restored original gauges Professional paint with new glass, tires, and trim Turn signals in headlight guards Here is a Show Quality 1957 Dodge Power Wagon that is finished in Sea Wolf Green / Black with grey interior. As with Willys-Overland, Dodge began making plans for a postwar version of the WC series trucks before the war actually ended. As it was nearing introduction, the automotive rumor mill had it called the WDX General Purpose Truck, and there were even some preliminary materials handed out using this name. By the time sales began in March 1946, the Power Wagon name had been applied. This also happened to be the name of one of the earliest automotive trade magazines and the name of a truck company started by Max Grabowski. Time soon obscured Max and the trade magazine, but the Dodge Power Wagon has lived on. The Dodge model T-137 WDX Power Wagon was loosely based on the T-214 Dodge military trucks commonly known as the WC Series. The 3/4-ton WC models were introduced in 1942 and replaced a line of 1/2-ton 4x4s. They came in a variety of wheelbase lengths, including 98, 114, and 121 inches. For the WDX, a 126-inch wheelbase was chosen so a good-sized cargo box could be added. The fenders were roughly the same as the military Dodges, and a new four-stake pocket, 8-foot pickup bed was developed, though other types of rear bodies were optional. The truck definitely had a civilian appearance but with a strong reminder of the military roots. Five colors were available: Dark Green, Red, Dark Blue, Yellow, and Seawolf Submarine green. Mechanically, the T-214’s 230ci L-head six translated from the military truck, as did the New Process four-speed transmission. Where the T-214 Weapons Carrier had a single-speed transfer case, the WDX used a two-speed divorced unit very similar to the New Process unit designed for the WWII Dodge 1 1/2-ton 6x6. This transfer case was, in fact, the direct ancestor of the NP205. The axles were largely the same as those used for the 6x6 or the Weapons Carrier and they were very stout dropout units with 9.63-inch ring gears, four pinion differential, and 1.375-inch chrome alloy ’shafts. The front axle steering knuckle used the almost-forgotten Tracta-Joint. The WDX came in two weight classes, the standard 7,600-pound GVW and the 8,700-pound version. The difference was mostly tires and gearing. This 8,700-pound truck had higher-rated 9.00-16s with 5.83:1 axle ratios, while the lighter truck had 7.50-16s with 4.89:1 ratios. The 7,600-pound unit had 8-leaf front spring and 12-leaf rear spring, while this higher-rated truck got 11-leaf and 14-leaf spring packs. This two owner truck was first bought by the minnesota telephone company and then sold to a Army Ranger Korean war veteran and professionally restored. 30xxx miles are beleived to be actual miles. This beast of a truck runs and drives great and it has new highway gears installed that will do about 50 mph on the city roads. Solid, very thick metal on this frame off restoration. Books and manuals included.